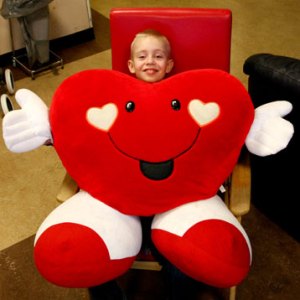 See Repairing My Son’s Heart and A Prayer for the Heart (1) for background info.

Before I begin I want to thank the many people out there, family as well as friends and strangers, who have commented or sent their warm greetings. Thank you all! Your prayers have truly blessed us.

Finally. The day we have been waiting for all these years has arrived. Johannes’ heart has kept the beat now for many years, which has been a true blessing, but now it’s time for bit of grand repairing. 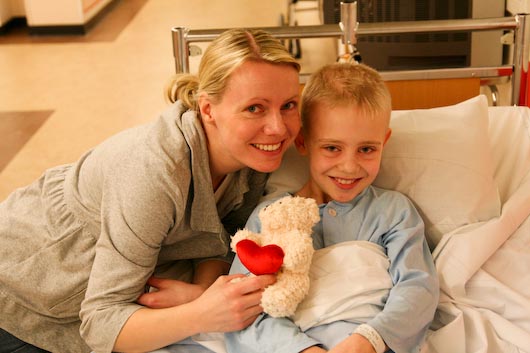 Early this morning we went to Östra Sjukhuset (the hospital) to sign in. Here’s Johannes with his mother, Angelica. We’re waiting to be taken up to the top floor. The Teddy holding a heart was a gift from the Primary children of our congregation. Johannes wanted its company during the operation. 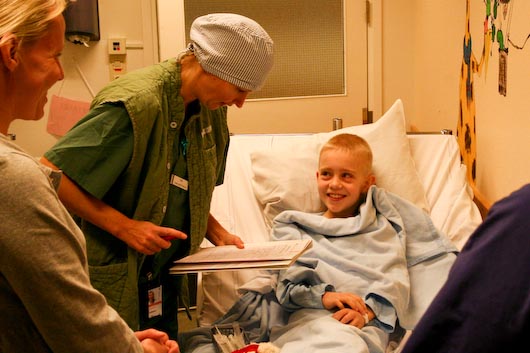 A few minutes later we were taken up to the top floor where Johannes met with the anesthetist who would take care of his “sleep” during and after surgery. Up until this time Johannes was still seemingly excited, and talked – a lot.

When it was time to say goodbye he quickly settled down, and I took this picture of him. For us this became a very hard, but special moment. Seconds later, when drugs were added to his system, which quickly put him away, his eyes were flooded as we held his hands. I was so proud of him. Not that he cried, but that he had been so positive and happy all the way to the end. I knew that he had felt fear before, yet he seldom showed it. But now it had started to overtake him; and he couldn’t, despite of how badly he wanted it, hold back his emotions.

How do you do this? I mean as a parent? You’re holding your child in your arms, while he is crying himself into a sedated sleep, afraid he will never wake up again. Now, even though we know that open-heart surgery is a no small thing, it still is “routine” nowadays for these skilled surgeons; we were confident that everything would work out. But to sit there, next to our son, while they put him to sleep, in the midst of his most frightening nightmare, that is a gruesome experience for any parent. We have never learned to deal with that part properly. In fact, I have always hated it. And so it was today, as my wife can also testify of, with her many tears.

Now it was time for the next step: Waiting. Another favorite of ours. But this time, time went rather fast (in the beginning at least). We tried to keep busy doing things with our other two children. My father-in-law also came by and graciously helped us with some food and child play.

At one time, though, I was feeling rather sad, sitting in a little kid’s chair, looking out the window. All of a sudden Clara pulls up a chair of her own right next to me, in which she hops into. She doesn’t say a word, but takes a look at me, as if she analyzing the situation. Then she jumps over to my lap and gives me a warm hug, lasting for a few seconds, after which she jumps down to the floor again and continues to play with her hospital toys. I think someone knew what I needed in that moment, if only for a few seconds. 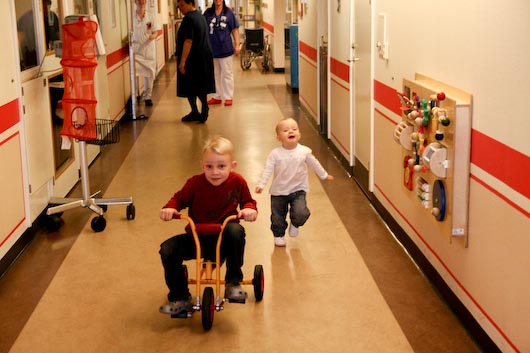 Then we waited some more. Seven hours total to be exact. If it was just Angelica and I, that would have been one thing, but we had two other children to entertain as well. Although they sometimes did a good job at doing that themselves. Here they are racing around the hallway, their 99th lap. (But I don’t think Isak is fair, letting his little sister run while he’s on the bike.) 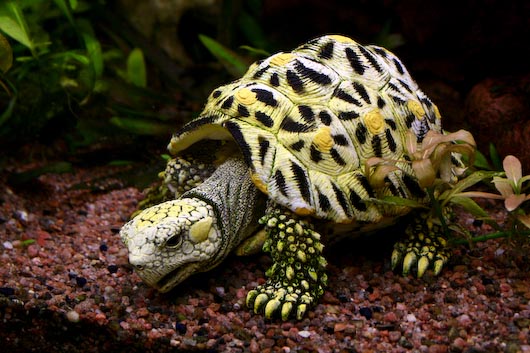 And this is the ultimate proof that I was getting bored and restless: I took a picture of a plastic turtle in hospital’s aquarium. Well… I had to do something to take my mind off the operation.

Then we got the call. The operation had been a success, and Johannes was waiting for us at the ICU (Intensive Care Unit). When we got there, he was still heavily sedated and breathing through a respirator. Isak came with us this time. I think he was worried about his brother. But what he saw shocked him, and set him off crying intensely. He simply wasn’t prepared for the scene that met his eyes. But hard as it was for him, it humbled him a lot, cause he had no idea of what Johannes had been through. Later on he didn’t want to leave the hospital, but rather stay with Johannes.

That is where I am now – with Johannes. It’s Monday evening and I’m sitting by his bedside, waiting for him to wake up. The nurses at ICU have told me the signs are good, and that he will wake up any time. I’m so excited.

And I thank God for watching over our son.

This site uses Akismet to reduce spam. Learn how your comment data is processed.